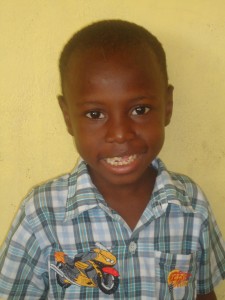 Jhon is a dream builder, and prospective architect, with an intriguingly clear vision and plan to rebuild his home, Haiti, from scratch. This six-year-old child wants to educate himself and become an engineer.  His dream is to improve the quality and beauty of constructions across Haiti.  Because he lived in extreme poverty, his parents could not afford raising him, nor putting him through school.  As a result, they made the difficult decision to entrust him to The Future Of Haiti Orphanage on September 30, 2013.  Here, their son can have a better future. He is now a 1st year kindergarten student, four years later than regular kids. Nevertheless, he is more determined than ever to excel in school and finally get to study architecture, which he is passionate about. You can see the sparkle in his eyes each time his sight is set on an old building, or as he walks across the schoolyard. It is as if he can already see the improvements, and the building itself being redesigned, the same way as by using a computer model. Help this boy become the new face of hope for Haiti by sponsoring his food and education. Empower him to make the difference he is so passionate about, and maybe along the way, you will be helping the closest thing to a potentially famous architect. Can you think of anything more rewarding?Jhon est né le 4 Mai 2008 à Delmas, il est le fils de Jean G. et de Fifie N. C’est un enfant en situation difficile qui vivait avec ses parents, vu le maigre revenu économique de ces deux, ils ont dû confier l’enfant à l’orphelinat LE FUTUR D’HAIT. Il est avec nous depuis le 30 sep. 2013, il est maintenant en première Annee Kindergarten. Il rêve de devenir ingenieur afin d’aider à améliorer la qualité et la beauté de la constuction dans le pays. Nous avons besoin de lui et vous invitons à contribuer à son éducation et a son succès.

We Are GuideStar Members

We are committed to transparency at FutureHaiti.org. Donations received are used to help the children of Haiti with food, clothing, shelter and education.

Grodysh Int’l Inc. – the Future of Haiti Organization (FOHO) is a grassroots non-profit 501 (c) 3 Charitable Organization, incorporated with the State of Florida, dedicated to improving the lives of impoverished children and communities in Haiti. We provide shelter, food, and education to Haiti’s rising generation of leaders.

There are no upcoming events at this time.

LET YOUR AMAZON SHOPPING HELP OUR KIDS IN HAITI

Click the button below to start shopping so all of your purchases can earn donations for us!