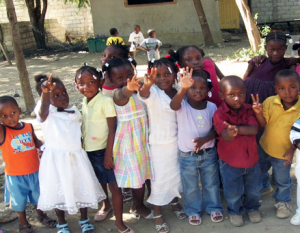 Although (FOHO) the Future Of Haiti Orphanage is our Featured Project, GRODYSH (GROup DYnamic for the Survival of Haiti) has actually been supporting affiliate orphanages since its inception in 2000.  We help with food, clothing, and schooling for several hundred children, mainly in the Nation’s Capital, Port-au-Prince, but also in other cities such Jacmel, Fort Liberté, Les Cayes, Jérémie, Gonaïve, Hinche, and Anse à veau, Port de paix.

We actually dispose of 7 bedrooms and another set of 7 new is to be built as soon as possible in order to create a more comfortable arrangement for our children. If we can have more than 15 of the under age children in one large bedroom, we are limited with the older ones (5 y/o and older) by the many in one room.

These new set of rooms will be built as second story for the actual dormitory building. Every room will be equipped with large multi user attached bathrooms. Every room will have 3 bunked beds, and 3 large dressers. Give your support!

We Are GuideStar Members

We are committed to transparency at FutureHaiti.org. Donations received are used to help the children of Haiti with food, clothing, shelter and education.

Grodysh Int’l Inc. – the Future of Haiti Organization (FOHO) is a grassroots non-profit 501 (c) 3 Charitable Organization, incorporated with the State of Florida, dedicated to improving the lives of impoverished children and communities in Haiti. We provide shelter, food, and education to Haiti’s rising generation of leaders.

There are no upcoming events at this time.

LET YOUR AMAZON SHOPPING HELP OUR KIDS IN HAITI

Click the button below to start shopping so all of your purchases can earn donations for us!